Note: I usually never attempted writing book reviews because each book whether good or bad is a person’s effort. May be not all are good storytellers. And it’s subjective whether a person will like it or not.

But here I write about this book not a review in particular just something which I felt like sharing.

“Life is unpredictable we all say

When breath becomes air, a book that piqued my curiosity because of its different title. I landed on to this amazing yet tear-jerking book while randomly surfing on internet as usual hunting for books worth reading as well as after listening to Dr. B M. Hegde (cardiologist, and orator) video about medicine.
But the time I started reading it, the very next moment I was absorbed into the world of the author. This may sound cliché but anyone who has read it will surely be driven by an emotional surge.

When breath becomes air is the journal of man, a doctor, husband, and son, Paul Kalanithi, who was diagnosed with a terminal ailment when he was at peak of his career, when his life had come to a certain pace and when he had already built dream for his future.

One gripping pain, a diagnose and he was hit by reality of life. Death. Which is constantly shadowing us, yet we are running off it, oblivious of when it will lay its cold hands on us.

But this book is not about his suffering it is more than life and death.

The author was a person enthralled to know the crux of life, intrigued to those esoteric untouched realms of life and always wanted to know life and death. For this he read a lot of books. He was enthralled by many authors and philosophers whose words he quotes time and again through his biography.

He wanted to be an author but followed the tradition of his family and became a neurologist who was known for his dexterity.

The book accounts his journey from his premedical days, his quest in becoming a neurosurgeon an area which is often relented by most students of medicine pertaining to its gravity and the pressure it puts on a person. His fight with death, his dilemmas and decisions.

The book itself he started to write when the prognosis of his ailment was done.
The clock was ticking
And his was race with time…

Unfortunately the book is still an incomplete account of his life. However though it is unfinished, still one will never feel it incomplete. This lends the reader contentment and lot of inspiration etched.

Take away from this book

The book is a ray of light for all thise who feel low in life. For those who think life is testing him/her more than needed and for the ones who always question why me?
The author touches the reader’s life in a new way. Unknowingly instilling the zeal to live.

Live fully till the end approaches

He makes us question why wait until death comes and knocks at your door? Why cringe on the problems? No matter if its going to take you away someday let’s make this race a worth.

“Let us not give
death an easy win.
Make it salute you
even after taking you in its embrace…”

No one is kept away from problems. We all face one. While one may find their problem to be grave than others, yet a problem becomes a problem only when we give it power.

Paul Kalanithi – during his practice days

Paul Kalanithi the author was one such person whose quest for life was more than the fear of death. He continued his practice, operations even when the pain was excruciating and unbearable. He didn’t allow pain to stop him.

The bed where he treated his patients had turned out to become a bed for him. Life had come a full circle. From a doctor to a patient. He was an empath, a fighter, a doctor in true sense.

He touched his patient’s life in a different way. And millions of people who read him after his death. 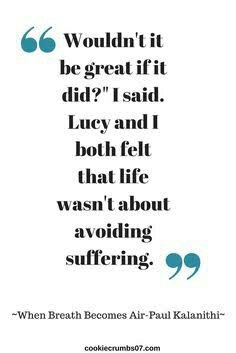 This book made me aware life is too short to cringe, to be sceptical, to hate or compromise dreams. It is one life, live it today or else there is no tomorrow.

Face your problems with zest
The phase wasn’t easy. How could it be? Life had jerked suddenly and there was no way ahead. He didn’t choose to turn himself away from it or sit and cry for this destiny’s stroke.

He didnt cringe to be vulnerable, decided to live because though his death had stamped a date now, he was still alive and he didn’t wish to die because death was actually yet to happen. He was still alive till then.

His last words “I am Ready” where one can peer through it into his strength. He lay his daughter in his arms, his last wish. The child too oblivious of what is happening and after 9 hours he died on the bed which was few miles away from where his daughter was born.

P.S. – There are some heart numbing revelations of surgery reading which you can feel your stomach churning. Believe me though it may seem obnoxious yet its worth it.

This book can’t be read in one go. It took me almost 15 days to complete it. Each phase you will have to observe and it will leave you thinking.

You may also face bolts of emotions raging, when though I won’t reveal. You have to read it for yourself.

Below is the link to the video of TED by Lucy Kalanthi.

He died right eight months after his daughter was born and is survived by his wife Lucy and daughter. He had documented his journey and this book is his autobiography which was released posthumously.

This book is available on Amazon as well as e-book on internet.

Do read if you wish to taste the truth of life. And know life is worth all the problems we face. Struggle is enticing.
All life we dart from ups and downs
And when death faces us eye-to-eye
We wish the line never turns straight ever.